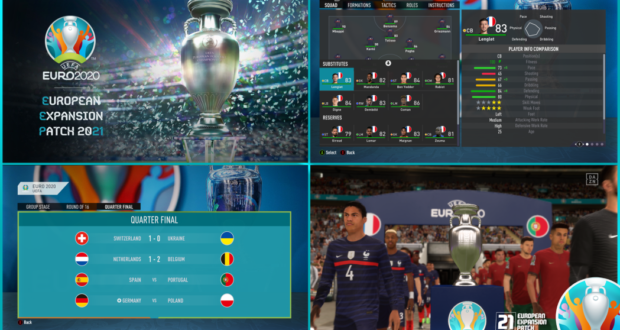 European Expansion Patch 21 is a FIFA 21 mod focusing on updating European leagues and German Regionalliga! Here’s a full rundown on the content that you can find in this mod:

EEP Euro v2.1
Another little update for the EEP EURO 2020.. Tournaments of EEP EURO v2 are compatible with it :slight_smile:

Installation:
Just delete EEP v2, replace the squadfile in Documents/FIFA 21/settings with the ones from download of v2.1 and load them ingame.

EEP Euro 2.0
– fixed and completly redone/updated over 50 kits and kitfonts
– fixed some roster issues in main and U21 squadfile
– updated main rosters to be up to date (replaced injured Jiří Pavlenka with Tomáš Koubek and all the other changes – also with Miniface :slight_smile: )
– some stability fixes
– reduced kickoff to euro groupstage match, euro final match and volta

EEP-Manager v2 changelog:
– you can now open also tournament files (which give you the abilty to change the squad of a running tournament or assign faces)
– Squad-Exchanger so you can change the national squads on your own without buggy ingame-editor
– Tattoo assigner

Important:
EEP Euro v2 isnt compatible with Euro v1. So tournaments started in v2 arent compatible. Delete v1 and apply v2. Also launch v2 first time with the option (you can find it in FIFA ModManager on the arrow-Icon next to launch-button) “Delete FIFAModData and launch”

EEP Euro v1.0
• EURO 2020 tournament with all 24 nations, real logos, scoreboard, crests, ball, trophy, groups, tournament system
• U21 EURO as additional tournament starting in Quarter Final like in reallife (with GER-DEN, NED-FRA ..)
• full compatible with each language thats supported by FIFA (also real nation-names in in the respective language)
• new and unique Menu (by [FMG] RBS)
• over 800 new styled minifaces (200 of them updated to the UEFA EURO shootings)
• 3 up to date (7th june) squadfile with real EURO 2020, U21 and EURO with Icons squads
• real EURO 2020 group match order (so germany plays 1st against france, after that portugal after that hungary only dates/time are may be a bit different)
• (nearly) real tournament system like round of 16 with winner group A against 2nd group C etc. (also with 4 best 3rd placed teams of the group stage joining round of 16)
• real adboards, banners and flags
• renamed und redressed stadium which looks similar to the missing EURO ones
• real stadium-assignment (for example quarter finals in Roma-like, Baku-like, Munich-like stadium and Wembley)
• assign facepacks with 100 of faces just with one click (EEP-Manager)
• Miniface Addon so each player of the EURO (also in U21 EURO) has a Miniface!

1) Download and extract EEP
2) Download and extract FIFA ModManager.
3) Launch ModManager as Admin
4) Import EEP and (if you have other mods installed) put it to the BOTTOM of your ModManager
4.1) Import the Theme-Addon from directory “Addons” if you want new graphical UI-experience
5) Copy and paste the Squad-File from EEP Download into your Documents/FIFA 21/settings directory
6) Launch it via Launch-Button
7) Inside your FIFA 21 mainmenu just go to “CUSTOMIZE” -> “PROFILE” -> “LOAD SQUADS” -> load EEP squads
Prevent any download of Squadupdates (from EA) otherwise it will overwrite the EEP squads and you’ll have to reload them (redo step 7)

How to install if you have the outdated EEP in your ModManager:
1) Open ModManager and delete the outdated (EEP / Theme Addon for Titel Update 12) EEP Mod
2) Download the EEP and if you want also the Theme Addon for Titel Update 13 if its available..
3) Extract the RAR and import only the fifamod (the ModManager has currently a bug that importing a RAR file into it will end in “there was a error. please check the log file”…
4) Apply the FIFAMod
5) Launch

If you start a new career use “Use Current Squads”!
Make sure EEP is working after you start a career.
Fastest way is to go into the transfermarket and search for “Moukoko”. If he is in, everything should be fine!

If you want to use the Miniface addon:
1) Download and extract LiveEditor.
2) copy the directory “LiveEditorMods” (from Addons/Miniface Addon) to Origin Games/FIFA 21/
(NOT THE FIFA 21 DIRECTORY FROM YOUR DOCUMENTS FOLDER..)
3) Launch your FIFA with EEP via FIFA ModManager and after that tab out of the game and execute the “Launcher.exe” from LiveEditor

If you want to check the new players (and their ratings) just have a look here.

If you want to support the project you can donate here.