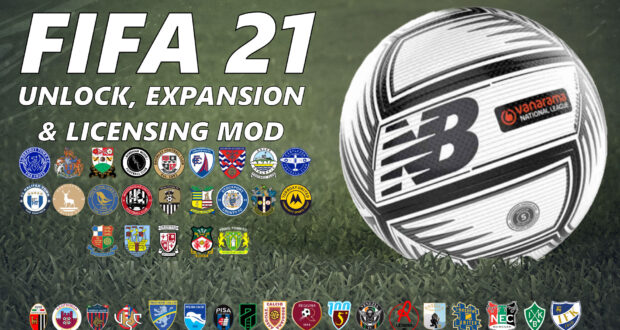 The unlock and expansion mod is a continuation of the work carried out by myself (SomersGaming) on FIFA 20 where I swapped the Argentinian league for the National League (tier 5 of English football).

This mod would not have been possible without the brilliant work by Aranaktu and Paulv2k4 to bring us tools that make modding a reality in FIFA21.

This second version of the mod is available on Paul’s tool (FMT) and can be downloaded here. This is version 9 of the tool and the one I’ve done all my testing on, so if you’re using another version I can’t guarantee what will and won’t work.

I’m also especially thankful to the people who have helped to improve upon what I previously created with thanks to Sebban, DanyBarking, drewdaudelin and Demonade, although special thanks are reserved for Mullvaden who has put in a serious amount of hours on the mod like me. All-in-all I suspect we have spent around 500 hours on this mod and I think it will be obvious when you play it.

National League teams are fully playable from their own league, expanding the RTG potential of the English leagues but, what’s special about this version is that we have actual rosters this time around – a mammoth task that incorporates players that have been in the game before and ones that we have created from scratch.

The mod itself is split into numerous sections in order that you can choose how much of it you use in order to speed up load times (although there are several of the mods that obviously have to be active). I have numbered the mods as a suggestion for mod order if you were using all of them at once. Obviously if you aren’t bothered about the kits for Argentina or the Saudi leagues or even Serie B then you can start at 4 and move down the order.

Paul’s tool allows us to add files into the game rather than simply replacing them, this is how we’ve been able to add the minifaces, for example. However, there are a number of files that are injected in this way including the option of running with our lite realism mod. In order that this aspect of the mod works you need to make sure that your anti-virus software doesn’t block the dll injection process, so you’ll need to create exclusions for the tool and the FIFA install directory.

The mod can be played with vanilla settings but honestly it won’t be anywhere near as difficult or immersive. We have tailored a number of files in order that the National League is better balanced within the game and improves upon some of EA’s flawed OP logic. The following is a list of some of the changes in our realism version of the lmod:

Even though this is the second version of the mod it should be expected that you will encounter some issues along the way, afterall we have added around 50 teams and 1000 players to the database, so please report anything you encounter via the discord server.

I hope you enjoy the mod!

The squadfile (SquadsUELv2Update) is a major requirement of the mod, as otherwise the game doesn’t know how to load the teams, players, competitions etc, etc. In order that it can be found in game you need to paste it into Documents > FIFA21 > settings

Once in the game you’ll need to load the squad file, this can be done by heading to the customise tab in the main menu, click on profile then load squads, select UEL MOD V2 UPDATE

EA’s frequent update pattern means that keeping the mod up-to-date becomes a mission in its own right. If you don’t play online game modes then you can put Origin into offline mode meaning it won’t do updates until you allow it to. Doing so will allow you to continue to play the game on the current version of the mod / tool until we can update the game.

To put the game into offline mode, simply click Origin in the top left corner and select Go offline in the drop down menu. (I’d also recommend having auto updates switched off too)